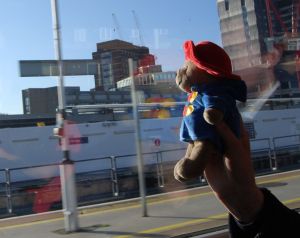 Scene 1: London Bridge Station – Mum of 5 boys and the Prodigal are on their way to a family christening:

‘It’s ok Prodigal, we’ve got loads of time.  We’ll let this train go and get on the next one. That’s how much spare time we’ve got……….I would go as far to say that we’re pregnant with spare time. In the meantime, let’s have another snap of the French Paddington  bear for the Prof’s school project. Do you reckon his foot was already hanging off?’

‘Madame, we do not accept these 20 pound notes.’

‘Do you accept Paddington bears?’

(That bloody cheap husband of mine, gave the kids a 20 pound note to buy themselves something with – yes, forget about the fact the Im trying to use it to buy a coffee – he’s the cheap one here, not me!)

‘Mum, this train seems to be taking its time.’

‘Shit!  Never mind that, hold Paddington up against the window so he can enjoy all that Kent has to offer and how amazed the French children will be to see a photo of that very enjoyment.’

We have 6 minutes before the christening kicks off at 2 p.m.

Running out of the station, the Prodigal is so desperate for a pee that he does one next to a bus stop on the main road.  Paddington goes too.

I, meanwhile am running UP the LONGEST, STEEPEST FRIGGING HILL in KENT.  Luckily I had the good sense to keep my ultra white mid top girl skate shoes on – set off nicely against my black pvc leggings and green coat. I must have picked up my great sense of style from living in Nowhere in France.

We are carrying one large bag, one handbag, one camera, one pair of shoes, one gift bag, two paper bags filled with the Prodigal;s old clothes as he went to a Gentlemen’s Outfitter just before meeting me.

He looked like an Edwardian gentleman but with pale beige suede lace ups (I guess the sales assistant in the shop wasn’t willing to give advice)  and I looked like a Romford tart. He smelt like he’d showered in litres of  whiskey and I just felt like I’d drunk that amount.

Throwing our bags onto the church bench and changing shoes.

Banging on the church door, rattling another door, looking through windows.

‘Funny that they should lock us out, Prodigal.’

We now enter the CORRECT church (what wally put two churches so close to each other?) as the christening is in full flow.

We were HOT. We were breathing hard.  I didn’t dare to take off my green coat as I didn’t think it respectful to flash my pvc legging-ed droopy arse in a house of God, so I nearly vanished into a pool of sweat.

No-one else seemed to be taking any photos.  I hadn’t dragged my heavy camera across Europe to have it lying idle.

I dragged my hot self, ducking down so that no one would notice me (?) across the aisle and sat at the front and then tried to take photos with the flash going off, blinding the priest and baby and then trying to look like I wasn’t doing that……..and failing.

‘hmm, that’s 5 flashes in a row. At one point will the priest tell me to poke it?’

I shall not win any awards for my photos.

And what a lovely day we had!

Later, as we went to leave the festivities to make that long journey back to London and then onto Essexshire, the Prodigal had lost his wallet…..and train tickets…and oyster card….and his mother’s sense of humour.

Scene: On the plane with the Prof and the Lips

Paddington is looking at the window as the plane starts to take off.  The Lips seems a bit agitated as he feels the place lift upwards.